Summers coming...but not just yet at a cold and wet Snetterton. But the racing was as close and competitive as ever, demonstrating the high standard of racing in the CRMC...

Sadly it looks like we have to wait a bit longer for the sunshine we had last week as Saturday started damp and got progressively worse over the weekend. By late Sunday, the rain had properly arrived! 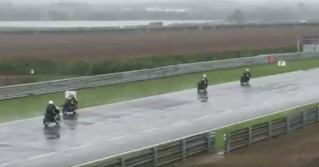 But a bumper race entry meant we had full grids from the start and the racing did not disappoint with some great scraps on both days. The eagerly awaited ACU Post Classic pitted the fastest riders and machines in the cold and wet and it was a really close and exciting race eventually won by Hudson Kennaugh who had been battling with Mark Cronshaw and Phil Atkinson, who both crashed out on the last lap giving Ant Hart and Kevin Wholey well-deserved podiums.

We'd like to thank our long-suffering marshals for braving the cold over the weekend and the hard-working race officials in the race office, race control, scrutineering and noise testing who helped us get through a packed race schedule over the weekend. We had a few gremlins with the timing systems which caused a few queries and a few surprising speeds (1300mph isn't the norm in MotoGP, let alone CRMC!) but everything did get resolved in the end.

There was an unusual report of a "theft" on Sunday - we heard that poor old Richard Molnar was reunited with his fairing after removing it for cleaning outside his garage. Covered in mud after some "grass-tracking action", it seems a passing spectator thought it would make a good souvenir and walked off with it, thinking it had been left near the waste skip as rubbish! Luckily the unwitting spectator was spotted watching the races later in the day, sitting with his prized souvenir and Richard got his fairing back!

Race results are published on the Sports Timing website, which will also give you the option of reprinting the race results sheet. Click here to visit their website

Championship results will be published in the next few days.