Ken Sprayson has sadly passed away

For 30 years, Ken was the principal specialist at Tyseley’s Reynolds Tube Company based in Birmingham.

In his role as a master of steel tubing ‘one-offs’, Mr Sprayson designed and built by hand motorcycle frames for motorcycling legends such as Mike Hailwood, Geoff Duke, John Surtees and Jeff Smith. 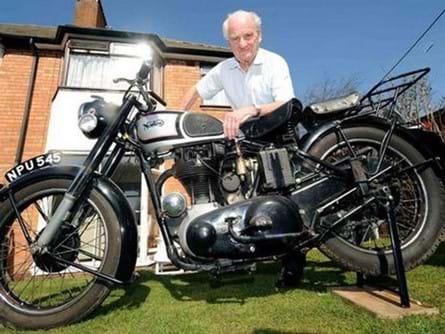 Ken Sprayson, from Stirchley, Birmingham, also built the frame for Richard Noble’s record-breaker Thrust 2, which topped 650mph in the Nevada desert in 1983.  Ken had spent the last few weeks in the Queen Elizabeth hospital in Birmingham.

Ken ran a welding service at the Isle of Man TT for 50 years and was a huge part of the TT Paddock and well respected by many TT competitors.

Our thoughts and prayers are with Ken’s family at this very sad time.

His funeral will be held at Yardley Crematorium, B25 8NA on 11th November at 1.00pm
After the funeral tea and coffee will be served at the motorcycle museum.