The CRMC Donington Park Classic Motorcycle Festival on August 3 - 4 once again promises to deliver a heady mix of top-class classic motorcycle racing and a genuinely unique display of racing exotica. Over the next few weeks, we are going to take a peek at some of the machines that you can see, hear and smell on track at Donington Park.

So, enjoy this first instalment and watch this space, there's lots more to come...!

For competitors, click here to enter the races or parades

One of the oldest of British motorcycle manufacturers, Matchless pursued a vigorous competition policy in its early years, founder's son Charlie Collier winning the inaugural Isle of Man TT (single cylinder) race of 1907 and repeating the feat in 1910, brother Harry having brought home the honours in 1909. However, by the 1930s Matchless had ceased to be thought of as a racing marque and after WW2 the firm, by now reconstituted as Associated Motor Cycles having acquired AJS, chose the latter's badge for its competition machines. In this context the arrival of a new Matchless racing motorcycle in 1951 caused something of a stir.

The prototype of what would become the G45 first appeared at the '51 Manx Grand Prix with Robin Sherry in the saddle, eventually finishing 4th after a promising debut. In fact, the machine was not an entirely new design but essentially a hybrid comprised of AJS 7R-based cycle parts into which was installed a tuned Matchless G9 roadster engine. The engine's bottom-end remained more-or-less stock G9 and retained AMC's unique centre-bearing crankshaft, but above the crankcase there was a new aluminium-alloy cylinder barrel and 'head, the latter sporting distinctively finned exhaust rocker boxes. Fuel was supplied by a single Amal TT carburettor and exhausted via short, megaphone-ended pipes.

In 1952 the prototype G45 garnered much valuable publicity and not a little controversy when Derek Farrant - later an AJS works rider on both Porcupine and 7R3 - won the Senior Manx Grand Prix after leading from start to finish. Strictly speaking, a works prototype had no business running in an event for amateurs riding over-the-counter machines, but AMC quickly announced that a production G45 would be available for 1953. Although still based on that of the G9, the production version's engine incorporated a different camshaft, which opened the valves via roller-ended followers, and breathed via a pair of Amal GP carburettors mounted either side of a central float chamber. Claimed power output was 48bhp at 7,200rpm, increasing on later models to 54bhp at 7,400 revs.

Apart from revised valve gear and the adoption of a forged crankshaft, the G45 changed little over the course of its life, and what developments there were did not keep pace with the opposition. Production ceased in 1957 after around 80 machines had been built, of which approximately half are thought to survive worldwide today. 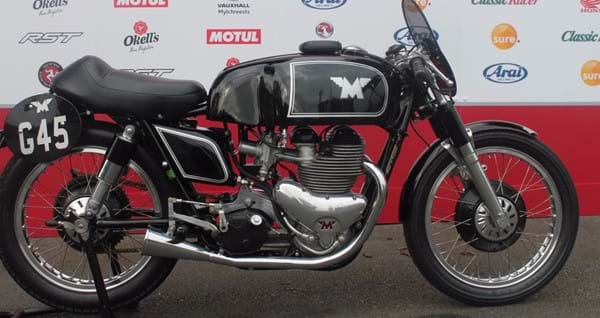 Although best known for their four-cylinder four-strokes, multiple World Championship-winning MV-Agusta built lightweights throughout its manufacturing career, and in its early days listed small two-strokes and even a scooter. The racing 125cc two-strokes were a major success, winning the arduous Milan-Taranto road race in 1950, '51 and '52, but at World Championship level the MVs were outclassed by the four-stroke FB-Mondial with its twin-overhead-cam engine. Count Agusta's response was to hire Gilera's chief designer Piero Remor together with its chief mechanic, Arturo Magni. However, the new Remor-designed 125cc four-stroke was not an immediate success, and it was only following Mondial's withdrawal from racing that MV bagged its first 125cc World Championship, Cecil Sandford taking the riders' title in 1952.

The following year MV offered an over-the-counter racer for privateers, which was developed directly from the works bikes. Italian regulations for the domestic 'Formula Sport' stipulated that machines should have only a single camshaft and four gears, and so the Monoalbero (single camshaft) 125 racer was born. Like its Bialbero (twin-cam) progenitor, the SOHC 125 employed a train of gears to drive its upstairs cam. Bore and stroke were 53x56mm and the motor breathed via a 27mm Dell'Orto racing carburettor, eventually producing a maximum of 16bhp at 10,300rpm. The cycle parts were virtually an exact copy of the '52 works bikes', featuring a tubular duplex loop frame, telescopic front fork with central hydraulic damper, and swinging-arm rear suspension. Brakes were full-width aluminium-alloy: 7" diameter at the front, 6" at the rear. Dry weight was 165lbs and the top speed over 90mph. Because Italy's long-distance road races, such as the Moto Giro d'Italia and Milan-Taranto required that machines be street legal and possess lights, a flywheel generator formed part of the specification. The MV Agusta Monoalbero 125 racer proved an enormous success, remaining in production until 1956 and continuing to offer privateers a competitive ride in the 125cc class for many years thereafter.

The Modenas KR3 on display is from the 2000 Grand Prix season and was ridden by Anthony Gobert as a one-off ride at Donington British GP. It still carries his race number and name on the screen. Other KR3 riders that year were Luca Cadalora, José David de Gea, and Mark Willis.

Jeremy McWilliams set pole on a KR3 at the 2002 Australian GP – the last time a two-stroke achieved this feat.

The engineers designed the Modenas KR3 to make the bike as agile as possible, and the consequences of this choice on the engine layout was to have one cylinder less than the competitors that meant lower reachable revs, which is the easier way to get power. Consequently, the KR Team focused all the efforts on the improvement of the volumetric efficiency, of the combustion and on the reduction of the mechanical losses. The engine, designed under the supervision of Bud Aksland, father of the Modenas-KR team manager Chuck, was a 2-stroke, V3 of 498cc with “squared” bore-stroke ratio (59,6mm x 59,6mm), and the angle between the cylinder banks near to 180°, far wider than older triple GP engines like Honda NS and DKW.

In the first version of the engine, there were two lower cylinders and an upper one, with two counter-rotating crankshafts (this arrangement would have been reversed in the following season): this choice, theoretically, provides a good balancing of the inertia forces, so the engine was designed without a counterbalancing shaft but unlucky, during the 1997 season, there were many mechanical failures, especially crankshaft spreading. The problem was the unique crankshaft layout of the KR3 engine: in order to improve the volumetric efficiency, the lower cylinders featured a shared crankcase, likewise the MuZ-Weber Swissauto engine, but this meant that between the two con-rods there was only an unsupported flywheel disc. It was spared one crankcase bearing, but the crankshaft was also much more flexible and the need to have both the pistons of the bank reaching the bottom dead centre (BDC) together forced to use staggered pins, that led to an unconventional firing sequence and unpredictable vibrations. The engineers will solve the problem in the 1998, coming back to a more conventional layout. The feeding system was the masterpiece of the bike: the KR Team dared to replace the conventional carburettors, like Honda in 1992, with a unique and totally self-developed solution.

The KR3 adopted electronic carburettors, without floating bowl: there was a pressurized duct which provided the fuel to the air flow, in a way closely similar to a fuel injection. The result was a better control of the air-fuel ratio, and a system that didn’t suffer the emulsification of the fuel due to the vibrations. Reed valves controlled the flow in the crankcase. The transmission compartment featured a dry clutch and a 6-speed gearbox. The exhaust system was developed and tuned in partnership with the Italian manufacturer Arrows. When the Modenas KR3 made its debut in 1997, the power output was about 160BHP. The engine operating temperature was kept under control by a ducted, under-seat radiator: instead of putting it behind the front wheel, the engineers developed a solution inspired by Formula 1 cars, in which the radiator is put in the middle of a duct that is convergent in the first section, to accelerate the air, and then divergent. In this way was possible to obtain a far more efficient cooling system, with a smaller and lighter radiator and also a strong reduction of the aerodynamic drag. The engine gradually improved its performances and in 2002 reached 180BHP @ 12,200rpm, with conventional Keihin carburettors, a counterbalancing shaft and exhausts by Micron. 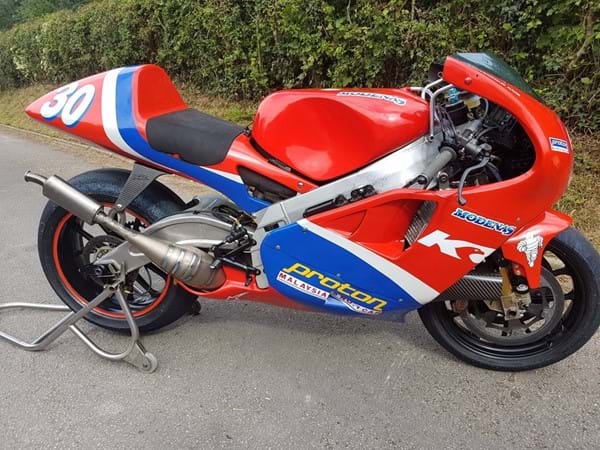